Took Wednesday and Thursday off.  Tweaked back, laziness, sleepiness. Lack of solid nutrition had me down.

Saturday:
Hit up Crossfit Potomac with Chip this afternoon for their free class. Its always fun to see how other guys operate.  Plus, my bosses husband was going to come check it out so its always good to know someone on your first day.  We did a nice beginner metcon:

wallballs, boxjumps, KBswing.  1 minute of each exercise, 1 minute rest. Repeat 3x.  Was exhausting. My metcons are awful...plus my stomach has been screwed up for about 2 days now. Not cool.

Back on track with the nutrition and sleep next week.
Posted by Erin at 4:17 PM 1 comments

So all those breathing squats of late have paid off! We last did back squats a few weeks ago and today I crushed those numbers.  I hit 150# for all 5 reps!  Up until 2 weeks ago my 1RM was 150#.  The good news is that I felt like I could do more.

Loving all the awesome gains of the last few weeks---rockin' on with the paleo diet. It's totally worth it.
Posted by Erin at 8:04 PM 1 comments

This workout took forever! The strict pullups are totally holding me back, but I make sure I do each freakin' rep.  Flew through the ring dips with the purple band. I started the C&J with 85#, but after attempting a few jerks it just wasn't happening and I had to drop to 75#. The rest of the c&j went really well and I finally got the rhythm for the cleans.  Also, Jerry worked with me a bit on my form--the jerks in the first wod were a bit wobbly--when I split jerk I need to get my front food to the 1 o'clock position instead of straight out.  Also, I realized I need a little bit wider grip on my cleans to get the elbow whip around.  Ready to hit the max C&J again soon!
Posted by Erin at 4:49 PM 0 comments

Wednesday was an epic body weight met-con morning.  We really haven't had too many of these of late.  Here's what it looked like:

Who cares about the time, seriously...i pray i never have to do this WOD again.  The deadlifts were a complete afterthought in this workout and pretty much the easiest part.  After the first round of Cindy I thought I was supposed to go do more deadlifts, totally not realizing it was THREE rounds of Cindy...boy was that a game changer.

I got to work on the first set of 3 Cindy rounds.  Pullups went off fine, pushups felt ok, and squats were a little rough the first round from tabata squats the day before.  Then on to round number 2.  DL's were easy, pullups were fine, pushups started to get hard...I pushed through.  Round 3--not even halfway done...by the 3rd set of cindy, the pushups were impossible and I'd broken the pullups into sets of 3/2.  Round 4 was a complete gut check.  The pullups were holding me back and I had to finish in 30 minutes. I dropped to my knees on that middle round.  Round 5 was just sheer HTFU mentality. Get the work done....and I did.  I was smoked afterwards and am quite sore today.  Then I ended up with a head cold/sinus thing so I'll be taking a few more rest days.  But not total rest...lots of painting and housework the next few days!
Posted by Erin at 9:38 PM 0 comments

I know, crazy looking right? Totally. I didn't want to go, but I got out of bed and did it anyways.  My HSPU's were with a 45# plate and an abmat.  I'm getting a few inches of depth on these and until the second set of 5 reps was feeling pretty good.  I ended up at 3 1/2 rounds.

After Party: Shoot throughs on the rings, basically a ring pushup, pick up legs and bring them under you and do a dip. It's a crazy move and everyone fell on the first try! I did get 3 solid ones in there.  Then I did played a little bit on the rings. It was fun!

More squat cleans--Whew! Nice to finally work these for awhile.

This felt awesome and super strong! I honestly think I could have gone for 110.  I had a little trouble getting full extension on the push jerks, but that's a pretty heavy push jerk.  Cannot wait to go big on the next round of power cleans and split jerks. We should see some big numbers. Looking forward to that.

Met/strength con was
12 minutes, every minute on the minute:
3 squat cleans
double unders-as many as possible

Let's just say that the DU's need a TON of work, I went for 75# on the squat cleans and probably could have gone heavier....

So the 30 days of paleo are over.  I am definitely going to continue only add a few things like greek yogurt (to give a little variety to breakfast) and wine. :)
Posted by Erin at 6:32 PM 1 comments

30 Snatch for Time---with a a catch! You had to "Anti-in" with XX pullups, then do your snatch. Then every minute on the minute do XX pullups, until you finish your 30 snatches.  You got to pick your level on how many pullups and how heavy your snatch.

Another great day in the gym and one day closer to easier clean living.
Posted by Erin at 7:39 PM 2 comments

Second part was more breathing squats.  20 resps of 75% of your max.  Last time I worked at 115# and made the jump to 125#.  Holy focus and concentration here. That load was heavy, but I did it and was so proud. it felt great.

Felt totally weird and wired all morning. It was so strange. Wasn't sure if it was the adrenaline or the protein shake i ate for breakfast. We'll see how tomorrow goes.
Posted by Erin at 8:39 PM 0 comments

Attempted 80# twice and failed! I had 80# back in Germany, but I guess some time off from this definitely hurt the overall strength.  2011 goal is 85#.

Survived a solid 6 rounds. Pushups were pretty tough, i just did regular ones to work on form since I'm pretty weak.  Box jumps went surprisingly well. :)

Paleo update: Was not very strict last week at all. Fell off the wagon, but I still think it was small. I major cheat meal per week and a few slips here and there. I missed the sugar the most last week, that's for sure.  Had a burger and fries on Saturday night and a few beers. Paid for it dearly the next day.  Discovered that taking magnesium helps the stomach issues. We will have to see how the week goes.

Overall update:  Have had some issues getting to the box more than 3 days a week, which is pretty terrible for me.  We've had some rough weather, prohibiting me from getting out of the driveway and lots of housework/repairs.  I swear we're never going to get this place to a respectable living state. Its exhausting!

Squat cleans. These come up only every so often. The don't seem to be in the regular rotation of lifts so I had no clue what today would look like.

Erin
2012 is here. It's time to get serious. I've been crossfitting almost 3 years now and finally I'm getting to where I want to be physically and mentally. 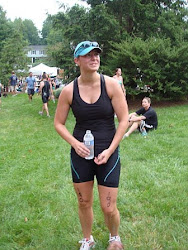